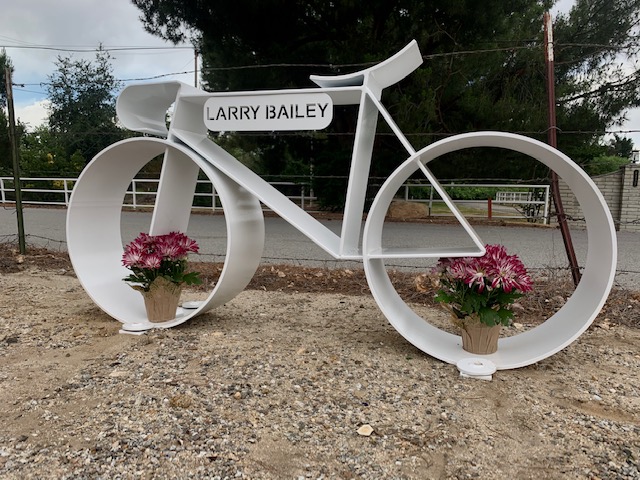 On Sunday, June 14,2020, Kern Wheelmen members and other cyclists from the community gathered at Ethels Old Corral to honor the passing of Larry Bailey. Larry was a kind, gentle, helpful man as well as an accomplished bike rider. Camellia and Mike Geary organized the event as well as creating and placing the ghost bike. Cami told me she had obtained Larrys’ bike and had taken the path of Larrys’ last ride and created a Strava route from it. We rode that route in Larrys’ honor. It began at Ethels, went through Hart Park to Rattlesnake hill then down to Lake Ming and through Hart Park again. On Alfred Harrell Hwy near Goodmanville Road is where he came to his final stop.
Cami and Mike created and installed a ghost bike at the site where Larry passed from a heart attack. If you aren’t familiar with ghost bikes, they are a white painted bicycle memorial placed where a rider has died.

Borrowing from the Irish: Larry, “May the road rise up to meet you. May the wind always be at your back. May the sun shine warm upon your face, and rains fall soft upon your fields.”